As part of our commitment to being a sustainable company, we are happy to announce that Win & Winnow became a carbon-neutral translation company. Specifically, we managed to offset a total of 13 tons of CO2, an equivalent of our emissions during the previous year, therefore reaching a carbon-neutral status. This was achieved through the Corredor de los Cedros Argentina project, carried out by The Carbon Sink.

What is the Corredor de los Cedros Argentina project?

It is a conservation and forest management project of native forests in Jujuy, Argentina, that seeks to preserve the Yungas-Jujeñas ecoregion and its biodiversity. Through this project, several companies that wish to be part of initiatives such as Net Zero 2030  can offset their carbon footprint.

Corredor de los Cedros seeks to avoid the destruction of thousands of km2 of native forest and to preserve the biodiversity of the region, with endangered species such as the tapir and the anteater, as well as the peccary, pumas, coatis, cruises, and more than 160 species of birds.

This area suffers a high level of deforestation and the advance of the agricultural frontier. Therefore, by implementing better forestry practices and restoration tasks, the project will tend to increase the carbon stock in the forest, which is why it provides a certificate for reducing emissions in the future. In addition, this initiative generates genuine employment opportunities for people in the surrounding communities, contributing to local social and economic development.

What does it mean to be a carbon-neutral translation company?

Achieving carbon neutrality means that the emissions we generate through our activities are proportional to the carbon we capture. In this sense, Win & Winnow partnered with The Carbon Sink, which extended a certification that evidences our commitment to the issue. Likewise, being a carbon-neutral company means that we are aware of the actions we must take to mitigate the negative impacts that our environment is currently suffering. 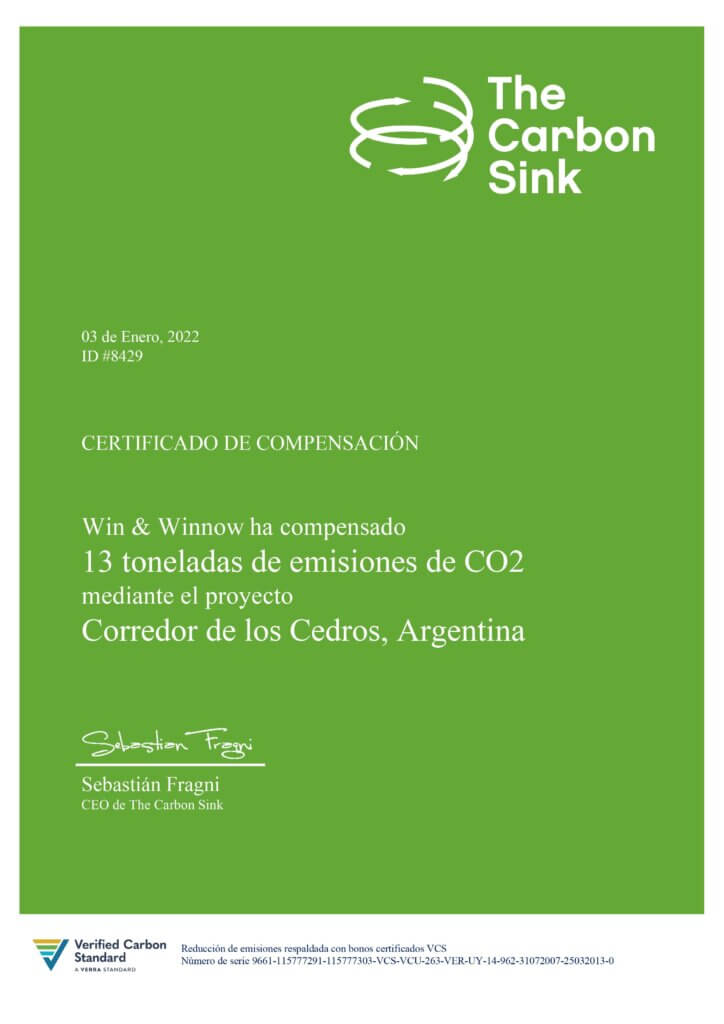 Among these actions is our commitment to Net Zero 2030, which we joined in 2019. This initiative was created at the United Nations Climate Change Conference, COP25, in Madrid, where more than 500 B corporations publicly committed to accelerating the reduction of their greenhouse gas emissions to achieve a 1.5-degree trajectory leading to net zero emissions by 2030-20, years ahead of the 2050 targets set out in the Paris Agreement.

Why are we doing this?

One of our priorities as a sustainable company is to implement internal policies and programs that have positive consequences externally. This is why we are proud to be a B Corporation, which means that as a translation services company we are legally committed to carrying out our activities with a purposeful impact on our society and the environment.

When it comes to the climate crisis and the environment, B Corporations see it as critical that all companies demonstrate leadership in eliminating emissions, reducing carbon, and ensuring a fair transition for displaced workers and communities to a net-zero emissions economy.

They also believe it is imperative to use the power of collective voice to advocate for the policy changes needed to remove impediments and align incentives that will drive meaningful climate action.

As mentioned above, on December 11, 2019, Win & Winnow signed the Net Zero Commitment, which guides to reduce and offset the remaining carbon emissions to reach net-zero emissions between 2025-2050. This is intended to reach targets ahead of those already stipulated in the Paris 2050 agreement.

Of the 852 companies that committed to this significant reduction of carbon emissions, 750 are B Corporations and Win & Winnow is proud to be part of this path towards a better sustainable future.

Learn about our services